Wellwoman, the UK’s No. 1 supplement for women, introduces its first ever comprehensive supplement specifically developed to give extra support to women who follow a vegetarian and vegan diet 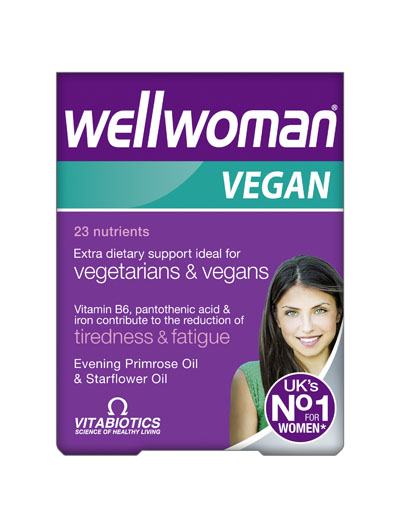 It's estimated that around 2% of the UK population is vegetarian, which is more than 1.2 million people.

Those who have made this lifestyle choice, do so for a multitude of reasons including health benefits and ethical concerns.

This can however, tend to lead to a higher risk of particular vitamin and mineral deficiencies such as iron and vitamin B12. As a result, compared with Wellwoman Original, Wellwoman Vegan has been formulated to include additional levels of key nutrients to help maintain nutritional intakes.

Wellwoman Vegan provides a unique blend of 23 nutrients designed to help safeguard dietary requirements for those following a vegetarian and vegan diet while meeting the demands of today's modern lifestyle.

Wellwoman Vegan has been officially registered with the Vegan Society and the Vegetarian Society.

The scientifically advanced formula contains magnesium and B vitamins such as B12, essential for normal energy release, in addition to vitamins C, D and E that help support a normal immune system.

Women typically have a higher requirement for iron than men, partly because of blood loss during the monthly cycle.

Therefore, as mentioned, Wellwoman Vegan contains higher levels of iron, plus vitamin B6 and pantothenic acid which help reduce tiredness and fatigue.

The Wellwoman Vegan provides 10 µg of vitamin D, in a vegan friendly form — the exact level recommended by the UK Department of Health.