With an extremely fast disintegration time and a high API loading capability, a newly developed excipient can be directly compressed into tablets that disintegrate in less than 10 seconds 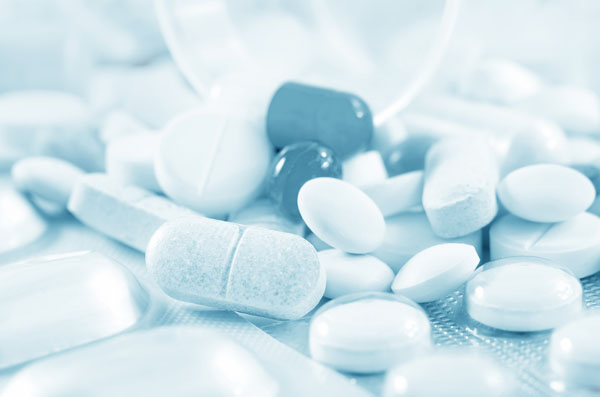 Orally disintegrating tablets (ODTs) are a preferred dosage form compared with conventional tablets because of the numerous advantages they offer, such as rapid dissolution and fast onset of action.

To maintain the porous structure needed for fast dispersion, most current ODT formulations are limited by their mechanical strength. With functionalised calcium carbonate, however, pharmaceutical manufacturers can produce ODTs that offer high mechanical strength while disintegrating twice as fast as comparable tablets.

ODTs are becoming increasingly important in the pharmaceutical market, both for prescription and over-the-counter medications, and can significantly enhance patient compliance. As they can be swallowed without the need for water, these dosage forms are particularly convenient for children and the elderly, and they’re the delivery format of choice for people who want to take their medicine ‘on the go.’ They are also particularly helpful for patients who have difficulty swallowing — a complication associated with a number of age-related conditions, including stroke and Parkinson’s disease.

The development of ODTs is a demanding process that requires two seemingly contradictory product attributes: high porosity for fast disintegration and high mechanical strength to prevent tablet damage during processing. ODTs can be prepared using different techniques, such as freeze drying, moulding, spray drying or mass extrusion. The final form has to deliver active ingredients in a short timeframe; but, depending on the technique used, it may be associated with low mechanical strength, high production costs and inferior stability.

The preferred method of preparing ODTs, from the perspective of cost and simplicity, is direct compression. However, the disintegration capacity of ODTs produced in this way is limited by the size and hardness of the resulting tablets. Therefore, when compressing ODTs, the main concern is ensuring a structure that enables fast disintegration without compromising the hardness of the tablets.

Very often, ODTs with optimal disintegration characteristics are small and/or have a low hardness value and are highly friable. Further challenges when formulating ODTs include cost-intensive production processes such as freeze drying, which often results in a lack of physical resistance, which can cause packaging difficulties. With Omyapharm Functionalized Calcium Carbonate, Omya has developed an innovative excipient that overcomes all of these challenges and provides excellent hardness as well as fast disintegration times.

Functionalized Calcium Carbonate (FCC) is manufactured from high purity calcium carbonate, which undergoes a surface recrystallisation process to create a structured mineral (Figures 1 and 2). This process can be controlled to obtain specific surface areas ranging between 30 and 180m2/g, a median particle size distribution of 2–30µm, and porosities of higher than 60%. 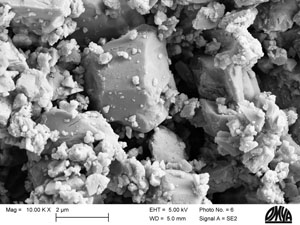 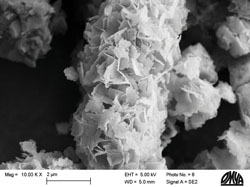 Omyapharm particles are characterised by an external lamellae structure and an internal network of interconnected pores. This structure facilitates the production of granules by dry granulation and, subsequently, tablets that feature both high porosity and high levels of hardness.

What’s also special about Omyapharm, compared with other porous excipients, is its lamellae morphology, which provides plenty of surface contact points among the particles — ensuring safe interlocking during dry granulation in roller compactors. This structure also contributes to greater tensile strength and preserves the porosity at compression forces that are lower than those needed for other excipients. High granular porosity is maintained, even at high compression forces, allowing for shorter disintegration times.

After milling and sieving, the granules are ready to be mixed with active pharmaceutical ingredients (APIs) and can be directly compressed into ODTs. Case studies have shown that FCC can be successfully loaded with an API content of up to 40%.1

In one study, researchers examined the compressibility of tablets made using FCC granules and compared them with tablets made with either FCC in powder form, conventional calcium carbonate, mannitol or microcrystalline cellulose (MCC).2 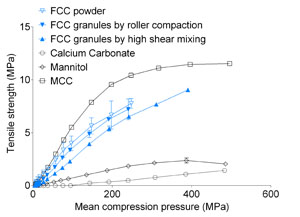 With FCC in the formulation, tablets were able to reach a comparable or higher hardness than other formulations at lower compression pressures, which allowed their porosity to remain higher than 50%. This provides a large volume of voids to accommode APIs. 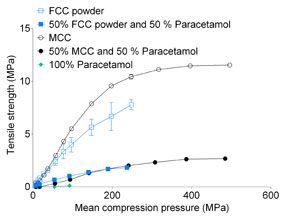 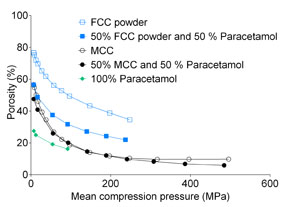 To determine residence time, scientists at the University of Basel in Switzerland used a tensiometer to measure mass versus time, which, in turn, allowed them to study water uptake and disintegration behaviour. They analysed the disintegration kinetics of 24 different formulations and identified four patterns. Type I was considered to be ideal behaviour because it resembled the market formulation. Type II was characterised by very fast water uptake but no disintegration.

Type III disintegrated in discrete steps, resulting in tablet pieces, whereas Type IV disintegrated only partially. FCC exhibited a Type I disintegration pattern, and its residence time was half that of the market formulation used as a reference.

FCC’s direct compressibility into granules and its high porosity allow faster water uptake, leading to a disintegration time that is twice as fast as the market reference product. Orally disintegrating granules manufactured with FCC disintegrate in two seconds and their corresponding ODTs in less than 10 seconds.

One excipient with multiple benefits

From a regulatory point of view, FCC also provides advantages: Omyapharm is a coprocessed excipient composed only of two monographed minerals and offers the possibility of multiple functionalities with very simple chemistry and a straightforward manufacturing process. Additionally, it is possible to tailor the characteristics of FCC, such as specific surface area, particle size distribution and pore size distribution, according to the requirements of various applications.

Furthermore, unlike many similar materials, FCC has the advantage of being highly biocompatible. Its composition is basically that of mineral bone material: hydroxyapatite and calcium carbonate. Bearing all of these issues in mind, Omyapharm is a very promising excipient that could revolutionise the ODT market. It will be interesting to see what kind of formulations this mineral-based ingredient will make possible in the near future.