The global market for dairy alternative drinks is expected to reach $16.3 billion in 2018, up dramatically from $7.4 billion in 2010 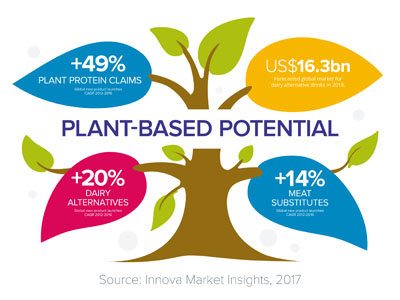 Significant developments in this area include the acquisition of WhiteWave in 2016, presenting Danone with the opportunity to further developing its interests in this dynamic market in both North America and Europe.

In another key region, Want Want, one of Greater China’s leading food processing companies, recently announced its expansion into soy and other plant-based beverages.

China is enjoying particularly strong growth for dairy alternative drinks, with a CAGR of 18.7% forecast between 2010 and 2018, reaching a market value of $6.7 billion, compared with a more modest, if still impressive, CAGR of 10% in the US.

Dairy alternative drinks accounted for 7% of global dairy launches recorded by Innova Market Insights in 2016, up from 6% in 2015. Actual global launch numbers more than doubled during a 5-year period. More than half of these launches were positioned as lactose-free, nearly 40% as vegan and just under a quarter as GMO-free.

“The dairy alternatives market has seen rising levels of interest in recent years, spurred mainly by consumers increasingly looking for lactose-free, dairy-free and plant-based/vegan options as healthy lifestyle choices, rather than regarding them as simply for those with allergies or intolerances,” says Lu Ann Williams, Director of Innovation at Innova Market Insights.

“The category has been further boosted by the growing availability and promotion of plant-based options to traditional dairy lines, particularly beverages, but also cultured products such as yoghurt, frozen desserts and ice cream, creamers and cheese.”

“Plant Powered Growth” was one of Innova Market Insights’ Top Trends for 2017, highlighting developments in plant-based foods, which are seeing increased demand from those who do not want to commit to a full vegan or even vegetarian lifestyle, but would rather pick and choose to suit their lifestyle, social life or health conditions.

According to Innova Market Insights, dairy alternative launches grew at a CAGR of 20% during the 2012-2016 period. Meat substitutes had a CAGR of 14% during this period, whereas the use of a vegan positioning in global food and beverage launches tripled from 2012 to 2016.

“In the move to offer something new, we are starting to see an increasing variety of non-soy plant-based alternatives, including cereals such as rice, oats and barley, and nuts – such as almonds, hazelnuts and macadamias – as well as more unusual options such as hemp and flaxseed,” notes Williams.

“There has been ongoing launch activity for a range of increasingly sophisticated flavours and blends of non-dairy milks from different sources. In line with the milks market as a whole, there has been a strong move into fashionable milk-based coffee drinks,” she adds.