From conception into our senior years, optimal brain health is now well recognised as being critical to overall well-being

Fundamental to this process is the need to ensure that the brain gets the key nutrients it needs to function as effectively and efficiently as possible.

As well as being rich in omega-3 polyunsaturated fatty acids (n-3 PUFAs), krill oil is also high in phospholipid-bound choline, as well as the natural potent antioxidant astaxanthin.

Until recently, supplementation with marine sources of n3-PUFAs was mainly limited to the intake of fish oil formulations. Today, however, the availability of sustainably sourced krill oil not only offers an ethical alternative to the exploitation of overstretched fisheries, but also delivers meaningfully enhanced benefits compared with fish oils as well.

Krill oil, like fish oil, is rich in the important n3-PUFAs eicosapentaenoic (EPA) and docosahexaenoic (DHA); but, unlike other traditional marine sources, in krill oil these compounds are delivered to the body by active carriers known as phospholipids.

This structural configuration has been demonstrated to more effectively facilitate the transfer of fatty acid molecules through the intestinal wall, thereby increasing their bioavailability compared with the format present in fish oil.

This has been established to be of clinical relevance in several studies in which krill oil has been shown to be more efficient and effective than fish oil in elevating plasma and red blood cell n-3 PUFA levels, enhancing the absorption of n-3 fatty acids into target organs such as the brain, liver and heart, as well as improving risk markers for cardiovascular disease.

Importantly, the observations that krill oil enhances the absorption of n-3-PUFAs in the brain also appear to extend to beneficial clinical effects in terms of function, which is probably not surprising given the brain’s rich phospholipid content and the important role that DHA has, especially in brain development and health. In general, the brain contains high amounts of phospholipids and phospholipid-bound DHA.

DHA is the major structural lipid in brain tissue and the central nervous system, and the membrane lipids of the brain’s grey matter and the retina contain very high concentrations of DHA. However, the brain has limited ability to synthesise polyunsaturated fatty acids, including DHA, from its n3-PUFA precursors.

Therefore, to maintain brain concentrations of these important compounds at physiological levels, plasma-derived DHA must be transported into the brain. To do this, the DHA must therefore transverse a membrane — the blood-brain barrier — that regulates the passage of compounds into the brain.

A typical example of the enhanced clinical benefits of krill oil compared with sardine oil was demonstrated in a recent 12-week supplementation trial in elderly subjects.

Here, krill oil delivered effects that were equivalent to or better than those of the higher dose of EPA and DHA contained in sardine oil when assessing working memory tasks, with the authors concluding it to be more effective in activating cognitive function in the elderly.

As components of different membranes and also by transporting essential nutrients directly into cells to become a structural part of cell membranes, phospholipids play an important role in cellular life. They cross the blood-brain barrier to make nutrients readily available. In the brain, phospholipids are structural components of cell membranes involved in intraneuronal signal transduction.

Vaisman et al. also reported that the ingestion of phospholipid-bound EPA and DHA increased the scores for a continuous brain performance task compared with the results obtained when these fatty acids were consumed in the form present in fish oil. These findings indicate that n-3 PUFAs incorporated in phospholipids act on brain function more efficiently than those incorporated in triglycerides.

This is supported by two other studies, which reported that the preferred physiological carrier in the body for DHA is derived from the phospholipid carriers that are present in krill oil. 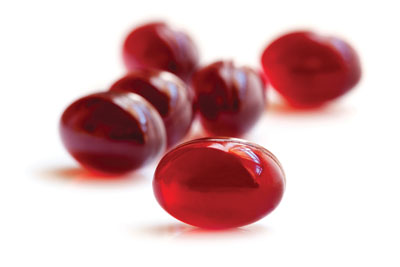 Moreover, other researchers have also identified that the n-3 PUFAs in krill oil are bound to these types of carriers in the molecular configuration most likely to be preferentially incorporated into the brain. Hence, it appears that the compositional structure of krill oil — with n-3 PUFAs bound to phospholipids — allows EPA and DHA uptake by the tissues more readily than those of other marine oils, and is most likely to bring about the observed differences in their effects.

Furthermore, it now appears that the concentration of phospholipids in krill oil has significant effects on supplementation too. In a study comparing krill oil of differing phospholipid contents, researchers found that levels of total n-3 PUFAs and EPA+DHA in red blood cells were increased following the consumption of an oil with a higher phospholipid content compared with that of a lower concentration, despite both oils containing the same levels of the fatty acids under scrutiny.

Choline is essential for the normal functioning of all cells. It is a fundamental component of different membrane phospholipids and participates in several relevant neurochemical processes. It is the precursor and metabolite of the neurotransmitter acetylcholine. Choline is a dietary component and, although it is also formed endogenously in the body, the brain cannot synthesise choline; therefore, plasma-derived choline must be transported across the blood-brain barrier.

Although no trials have yet examined this effect specifically for krill oil, a study assessing the consequence of adding astaxanthin to fish oil has demonstrated a synergistic benefit of the two components together compared with fish oil alone.

Studies from the same group demonstrated that the combination of astaxanthin and n3-PUFAs deliver enhanced cognitive benefits in a preclinical setting owing to additional antioxidant protection provided by astaxanthin.

An experiment assessing the efficiency of absorption of astaxanthin from either krill oil or salmon using a gastrointestinal tract simulation model demonstrated a significantly higher level of absorption of the compound from krill oil (almost 100%) compared with salmon.

The authors suggest that this is because the astaxanthin in krill oil is present in a form that enables the compound to be more effectively incorporated into carriers that transport it into the bloodstream, thereby delivering enhanced intestinal absorption from the phospholipid-rich krill oil.

Krill oil: the significance of synergy

This literature clearly demonstrates that krill oil is significantly more than simply an alternative marine source of the important omega-3 fatty acids EPA and DHA. Its uniqueness in terms of the way in which it presents these compounds to the body as phospholipids means that their bioavailability is enhanced when compared with the same dose of EPA and DHA delivered in fish oil.

It is also clear that the high phospholipid content of krill oil delivers additional benefits in its own right, which are further enhanced by the presence of natural astaxanthin. This suggests that these elements work together in synergy to deliver a supplement in the form of Rimfrost krill oil whereby the whole really is greater than the sum of its parts.

A fully referenced version of this article appears in the May/June 2018 edition of Nutraceutical Business Review (Volume 5, Number 2).