A new solid form of omega-3 fatty acids has been developed, which offers superior bioavailability, stability and handling properties, and can be readily included in a wide variety of formulations, offering extended scope for the development of new consumer products

Omega-3 polyunsaturated fatty acid products containing the key fatty acid components eicosapentaenoic acid (EPA) and docosahexaenoic acid (DHA) are becoming increasingly important as food supplements and as functional food components. This is because of their proven effects in cardiovascular and cognitive health, which are supported by approved EFSA and FDA health claims.

In heart health, omega-3 fatty acids confer a protective effect by reducing plasma triglycerides, blood pressure and inflammation, all of which are risk factors for atherosclerosis.1 In the brain, DHA is the main omega-3 fatty acid, which is important for neurotransmission and the stability of the neuronal membrane.

DHA is required both in the womb and during early infancy when the brain is growing rapidly, and also throughout life, whereby it protects the brain by reducing neuronal inflammation, oxidative damage and vascular ageing.1 Omega-3 fatty acids have been shown to have positive effects on memory and learning, both in healthy people and in those with mild cognitive impairment.

Not all omega-3 formulations are equal

Although meta-analyses of human trials of omega-3 fatty acids, covering more than 400,000 participants, have demonstrated a positive effect on heart health, there are still many differences between individual results.

Some human trials have reported conflicting results because they have not controlled for the type of omega-3 fatty acid supplement used or have not monitored the type of diet consumed by the participants. Some of the types of omega-3 product used in human studies include

Relative bioavailability trials have demonstrated that these different omega-3 forms can exhibit very different absorption characteristics. For example, a study by Lawson showed that the peak absorption of all types of omega-3 was reached 5 hours after administration, and that the free fatty acid form had the highest availability, being greater than the triglyceride, and more than three times that of the ethyl ester form.2

Another large-scale trial by Davidson confirmed these results, with a peak absorption of the free fatty acid five times higher than that of the ethyl ester.3

As omega-3 products are often consumed as part of a low fat diet, or with a low fat meal, this means that the ethyl ester and triglyceride forms are not being effectively absorbed. As such, the consumer is not obtaining the full benefit of the product.

Evonik has now developed a solution to the problem of variable omega-3 bioavailability. AvailOm is a highly purified omega-3 product containing high levels of EPA and DHA, which is NDI and GRAS registered.

Figure 1 (left) shows the peroxide value of AvailOm and Figure 1 (right), the iodine number, in comparison with a typical omega-3 ethyl ester product, both charts demonstrating the improved stability of the AvailOm form. The long-term storage stability of AvailOm is shown in Figure 2, where it can be seen that there is no loss of EPA or DHA content during a period of 24 months.

Compared with other commercial forms of omega-3, AvailOm has a higher bioavailability because it rapidly dissociates to omega-3 free fatty acids and lysine in the stomach. 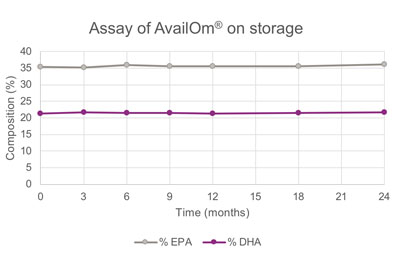 In this way, the slow enzymatic hydrolysis of the ethyl ester and triglyceride forms of omega-3, which are necessary before the product can be absorbed, are completely eliminated.

The free fatty acids are rapidly absorbed through the wall of the small intestine and are incorporated into chylomicrons (the form in which the omega-3 fatty acids are transported into the circulation). The high bioavailability of AvailOm is thus assured … even when the product is consumed as part of a low fat diet.

Application and advantages of AvailOm

The unique characteristics of AvailOm make it an ideal choice for formulation into a wide variety of consumer products. It is a dry powder, which makes it easy to handle for manufacturers of tablets or capsules, or it can be directly incorporated into food products.

Standard tablet presses and capsule filling equipment can also be used for the formulation of AvailOm. Other advantages are its high stability and low odour, and the guaranteed high concentrations of the free fatty acids in the product.

The minimum concentration of EPA + DHA in AvailOm is 45%, and this, coupled with the higher bioavailability compared with the ethyl ester, means that fewer tablets or capsules are required to achieve the same dose.

In conclusion, AvailOm is a stable, highly active and bioavailable solid form of omega-3 fatty acids, which can be easily formulated into end products and can be consumed without the necessity of eating a high fat meal.