Fold it, seal it, tape it, box it, pick it, place it — automate it. No, these aren’t Daft Punk lyrics, but the separate processes that Finland-based Orfer Oy needed to automate to speed up its packaging operations.

However, automating these processes without expanding on factory floor space was no easy feat. For a new design of a fully automated packing machine targeted to the food and packaging industries, Orfer needed a robot that offered fast and accurate handling and that could easily integrate with a vision system to track and pick parts from a moving conveyor.

Orfer Oy has worked with TM Robotics since 2004 and depends on the fast, accurate, reliable and cost-effective Toshiba Machine robots from TM Robotics.

Orfer’s newest system — the ORFER BoxCellPlus — expands on the popular BoxCell packing cell with the ability to open flattened boxes, fold the flaps, and seal the bottom with tape and then fill the box with products — all in one economical, space-saving, and fully automated packing cell.

However, before manufacturing this new product, the robot at the heart of the BoxCellPlus needed to be easy to use, flexible, and cost-effective, with high-quality components for reliability and low maintenance.

For the design of the BoxCellPlus, Nigel Smith, CEO of TM Robotics, helped Orfer define the robot specification based on the reach, payload, and cycle time requirements for food and packaging applications.

Smith assessed Orfer’s needs and ruled out a six-axis or spider-style robot. “Packing is a classic pick-and-place application,” he explained.

“It doesn’t require the dexterity of a six-axis robot and needs a greater working envelope than a spider-style robot offers.” With this in mind, Orfer standardised on the Toshiba Machine TH650A high-speed SCARA robot for the BoxCellPlus.

“Toshiba Machine’s SCARA robots can reach as far as 1.2 m, but the TH650A is one of our best-selling robots owing to its reach of 650 mm, which is closely equivalent to the length of the human arm,” Smith continued.

“Many automated processes were originally designed for human workers, so consciously or not, this is a common specification, especially for packing and assembly applications.” 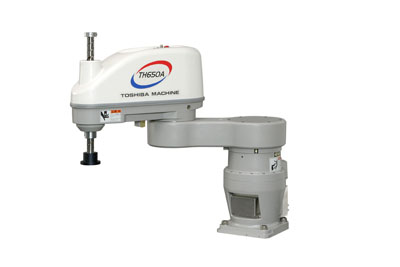 Although Toshiba Machine SCARA robots can handle payloads of up to 20 kg, the TH650A payload of 10 kg is ideal for food packaging. This allows a wide variety of products to be picked, while supporting a variety of tool configurations.

“A company that has multiple sizes of chicken products may need a gripper capable of picking up the one-, two-, or five-kg family pack,” said Orfer’s Mäkelä. “A single gripper for these products requires a number of components, all of which need to be considered when looking at the robot’s final payload."

"The 10-kg payload of the TH650A gives our engineers plenty of flexibility to design their end-of-arm tooling.”

TM Robotics was able to help the company evaluate the two robots and make the best decision for the BoxCellPlus application.

“The TH650A uses a larger motor and high-performance RF gears on joints one and two, which are the strongest, longest-lasting gears for a SCARA arm,” said Smith. “This, along with its fast cycle time, made the TH650A ideal for the high-speed, high-throughput demands of Orfer’s end-of-line packing application.” 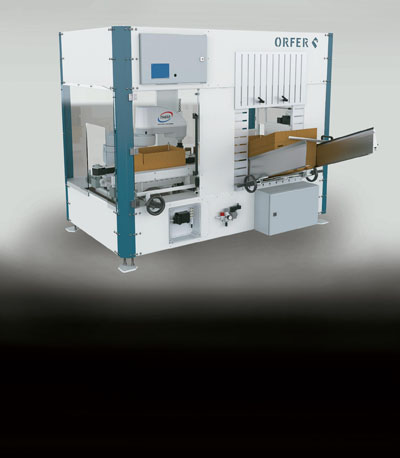 Orfer’s designers chose the ceiling-mounted option for the TH650A robot so it could be placed above the conveyor rather than using the standard floor mounting to the side.

This allowed them to minimise the overall size of the BoxCellPlus while maximizing the robot’s ability to access products coming down the moving conveyor and place them into the box. The smaller robot also helped make the system more cost-effective overall.

The TH650A robot’s ability to place parts accurately within 0.01 mm was enhanced with an extended Z shaft of 400 mm that enables parts to be placed deeper into the box. This accuracy and depth helps prevent product damage during packing, and provides consistent, high-quality output for Orfer customers.

Owing to its modular structure and adjustable control system, the BoxCellPlus can be easily integrated into factory or warehouse management systems.

As part of an automated packing system, the BoxCellPlus can be fed from conveyors from a weight-checker, labelling machine, or a vacuum packer. The robot also interfaces with leading vision systems, which can be used for inspection and to send coordinate data to the robot to pick parts from a moving conveyor.

Orfer is able to pass along the advantages of the Toshiba Machine robot in its new BoxCellPlus system, including faster, more accurate processing, smaller size, and lower cost.

“Our customers could use multiple machines to erect boxes and fill them, which could take up as much as 50% more space on the production floor,” said Mäkelä.

“With the BoxCellPlus, both of those functions happen in a smaller space and at as much as 15–25% lower cost than using multiple machines.”

“Our focus is on helping customers identify their most important system requirements and meeting those with exactly the right robot,” said Smith.

“In comparison with a six-axis robot with a cycle time of 5 seconds, the Toshiba Machine SCARA robot’s cycle time is approximately 2 seconds, which dramatically improved capacity. And it costs about 40% less than a spider robot.”

Mäkelä concludes, “Toshiba Machine robots have excellent product-handling capabilities, and have proven to be reliable, durable, and maintenance-free. And we can always count on the fantastic service and support from the TM Robotics team.”

Automating several processes without expanding on floor space can be difficult, but with the correct combination of automation, such as carefully chosen robotics and ceiling mounted options, the rewards can be excellent.

Toshiba Machine changes name after Toshiba Corp split
Automating the food and drink industry
Should robots pay taxes?
What is Made Smarter?