For Vidya Herbs, hemp is becoming an increasingly interesting raw material. Several beneficial ingredients have been identified in various parts of the plant. From the seeds, hemp oil and hemp proteins present high nutritional values, whereas the stems can be used to produce insulation for houses and the flowers provide cannabinoids that can be used to treat physiological ailments, reports Dr David Daguet, Scientific Director 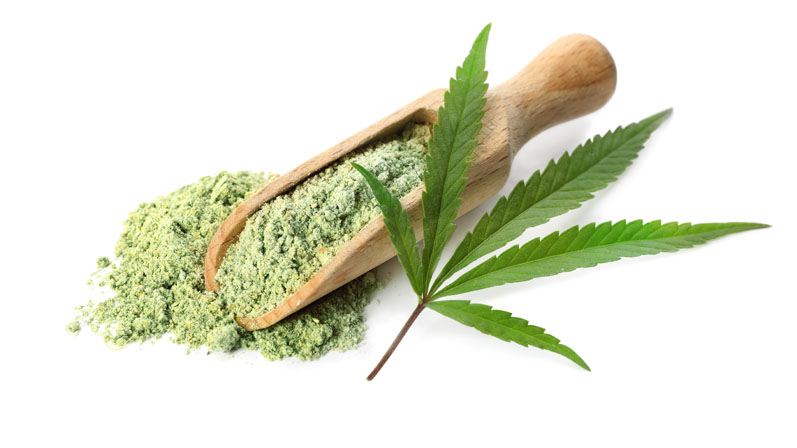 In addition to the environmental impact of food production, the simple necessity to provide the body with all the nutrients it needs is not as easy as it used to be. Protein consumption, in quality and in quantity, is directly linked to our age and health status. It’s recognised that animal proteins are highly digestible and rich in essential amino acids, but their advantages must be weighted against the quantities we consume.

It has been demonstrated that the overconsumption of animal proteins puts the health of our kidneys at great risk. Published studies (The National Health and Nutrition Examination Survey) based on work done by the North American Centers for Diseases Control and Prevention indicate just how prevalent the silent development of chronic kidney disease is.

To illustrate this point, in the US, there were 50% more cases of end-stage kidney disease in the 1999 to 2000 period compared with previous years.

As noted by the French Agency for Food, Environmental and Occupational Health and Safety (ANSES), protein requirement changes during the different stages of a human lifecycle. For example, pregnant or lactating women must adapt their diet to include at least 70 g of protein per day or 1.2 g/kg of body weight/day.

In addition, to reduce the risk of sarcopenia, seniors must adapt the quantity and quality of ingested protein by eating 1 g/kg of body weight per day, thus promoting the consumption of branched-chain amino acids.

It has been shown that, for seniors aged 60 and older, adding plant protein to their diets may delay unhealthy ageing when replacing carbohydrates, fats and animal protein.

This is especially true for meat and dairy products.1 Plant proteins are also beneficial to those people who are younger than 60; they should consume 0.83–1.2 g/kg of body weight per day, representing 10–27% of their daily energy intake.

A recent clinical trial studying the metabolic benefits of introducing plant protein into the diets of overweight people concluded that, within a plant-based diet, there were improvements in body composition and reductions in both body weight and insulin resistance.2 A plant-based diet does, however, reduce the intake of leucine and histidine.

Because the environment and quality control are parts of Vidya’s Full iD programme, Vi-Hemp Pro is sourced from France. Our hemp resources are totally traceable, from seed selection and cultivation to processing. The cultivation of our oilseed requires only low-intensity agronomic practices (few inputs and little water).

Vi-Hemp Pro is gluten- and THC-free and is characterised by its 45% protein content, its fibre content and its polyunsaturated fatty acid ratio (w6:w3 = 4). It is also low in digestible carbohydrates. Vi-Hemp Pro has the distinction of being rich in sulphuric amino acids such as methionine and cystine, as well as arginine, which has cardiovascular benefits.

The hemp proteins are mainly of two types, 60–80% edestin and 25% albumin. Its essential amino acid profile is comparable with other high-quality proteins, such as casein and soy protein, and are sufficient to meet the Food and Agriculture Organization (FAO)/World Health Organization (WHO) suggested requirements for 2–5-year-old children. Its branched-chain amino acid content is also of interest to senior consumers.

Its green colour and pleasant nutty taste make it ideal for both sweet and savoury recipes. Vi-Hemp Pro can be incorporated into many formulations to enrich them with protein and to replace some or all of the extant animal protein.

It can be used in dry forms such as cereal bars, breading, crackers and cookies, and in liquid forms such as vegetable milks, vegetable yoghurts and, of course, vegan products. Vi-Hemp Pro is also easy to digest, which is important for sportspeople and those who are regularly active.

Cannabidiol (CBD): a molecule in ascendance

Regarding health benefits, CBD is believed to help manage anxiety and mood disorders. The anxiolytic effects of CBD have been extensively demonstrated in animal studies and healthy human volunteers. More precisely, CBD seems to act on the reduction of anticipatory anxiety.

A recent clinical study done in Japan confirmed the very interesting anxiolytic activity of CBD on a specific teenage population. After only 4 weeks, a questionnaire-based evaluation showed that CBD decreased their anxiety.3

Owing to its anti-inflammatory properties, CBD may have a beneficial role to play in the treatment of joint pain. However, more studies are needed to define its mechanism of action and active dosages.4 The analgesic property of CBD, as well as its anxiolytic activity, were confirmed in a study on 397 subjects in New Zealand. Positive side-effects included improved sleep and appetite but no associations were found between CBD dose and patient-reported benefit.5

The long-term use of hemp extracts to treat diseases and improve the quality of life of patient is still not globally approved. Dravet syndrome or resistant epilepsy may be alleviated by CBD.6 Some of the current users of CBD are those suffering from multiple sclerosis.

CBD could effectively be administered to reduce fatigue, pain, spasticity and, ultimately, improve mobility.7 Because of the world’s ageing populations, the neuroprotection afforded by CBD should also be considered.8

CBD is a very promising compound for the nutraceutical market because of its numerous potential health benefits; but, it is also used and coveted by the pharmaceutical industry. There are two criteria required for the future authorisation of CBD in nutraceutical products:

Very recently, CBD has been classified as a Novel Food — with some restrictions concerning Cannabis sativa-derived products: “Some products derived from the Cannabis sativa plant or plant parts such as seeds, seed oil, hemp seed flour and defatted hemp seed have a history of consumption in the EU and, therefore, are not novel. Other specific national legislation may restrict the placing on the market of this product as a food or food ingredient in some Member States. Therefore, it is recommended to check with the national competent authorities.”9

Considering the two above statements about Cannabis sativa and cannabinoids, hemp seeds, flour and seed oil remain excluded from the categorisation of Novel Foods if cannabinoids have not been added as ingredients.

Traces of cannabinoids with undetectable THC are then authorised because they have not been added as an ingredient. Vidya Herbs, in its attempts to promote healthy ingredients with a low environmental impact, has developed nutritional ingredients from Cannabis sativa that represent an ecofriendly vegetal resource.