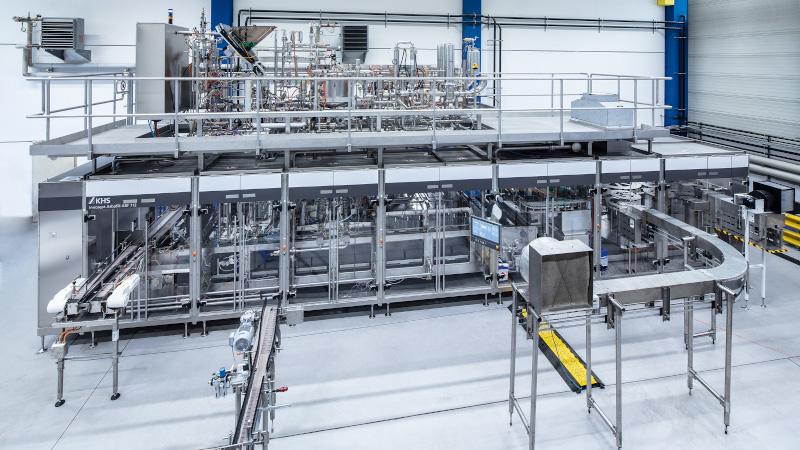 Sensitive beverages like mixed milks, juices, smoothies, iced teas and near-water products make high demands of hygienic filling so that the consumer can enjoy them fresh, the company says.

It has developed several optimisations for its modular linear aseptic filler and says most machines can be retrofitted with the further developed components. The linear aseptic fillers can be blocked with a rotary stretch blow molder to form a compact unit. For this purpose, KHS has developed a transfer module to harmonise the continuous PET bottle flow with the stepped filling process.

This is done with the help of a transfer carousel that separates the containers into units of ten. During a brief stop phase these are removed by grippers and placed in the filler’s carrier plates. There are three variants of the module: one for blocking with a stretch blow molder, a second with an additional discharge to a Plasmax coating machine and a third with an extra bottle infeed that enables the filler to process both PET and HDPE bottles.

The company has also developed technology to improve flexibility, allowing machines to handle more bottle formats with shorter changeovers. Handwheels marked with scales permit the exact height and diameter of a container to be configured and ensure that these settings can be reproduced.

Instead of one drive for all ten capping heads, each capping head is equipped with two servodrives apiece. While the first drive lifts and lowers the capper cone, the second drive controls the capping rotation. The servodrives are programmed on the HMI. Automated conversion and the reproducibility associated with this allow different caps to be used, thus increasing flexibility without the operator having to make any manual adjustments. The parameters needed for correct capping of the PET bottles are stored in what are known as cap recipes; each cap used can be individually configured.

Bottle grippers act as an anti-twist lock that holds the container in place just above its base while the screw capper screws the bottle cap closed. KHS has now replaced the previous circular rubber bumpers held by one arm respectively by much larger half-shells that are attached to two arms each. The effect is similar to holding a bottle with two hands instead of with four fingers: the larger contact surface reliably prevents unwanted rotation of the container, the company says.

The company has also introduced a switching valve which controls the volume of the inflow to the actual filling valve and thus permits a total of four different infeed speeds. If the infeed is slower or at a lower volume, the amount of foaming is reduced, which KHS says is key for beverages that produce more foam.

“When filling and capping beverages so as to prevent recontamination, filling under aseptic conditions especially is a gentle process,” explains Manfred Härtel, filling product manager at KHS.