With so many consumers now relying on omega-3 supplements for their perceived health benefits, providing a reliable, palatable and high quality product is becoming increasingly important for manufacturers 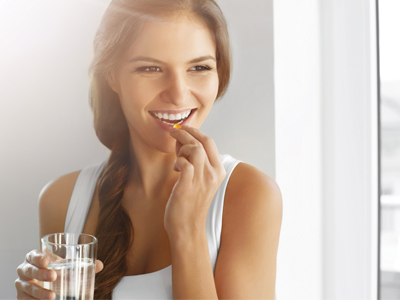 Omega-3 long-chain polyunsaturated fatty acids have become a staple in the food supplement world. Many health claims have been made for eicosapentaenoic acid (EPA), docosahexaenoic acid (DHA) and alpha-linolenic acid (ALA), and there are high concentration prescription-only versions available. Although omega-3s are increasingly being added to food products, the vast majority of the market remains in the form of nutritional supplements.

In the European Union, permitted health claims for EPA/DHA include the maintenance of normal blood pressure, triglyceride levels and heart function. Further claims are allowed for DHA, including promoting eye and brain health. Most of these claims are not permitted for ALA as it needs to be converted to EPA/DHA in the body to have these effects; typically, this conversion rate is very low in healthy people. ALA has one heart health claim — contributes to the maintenance of normal blood cholesterol levels — which is only true when 2 g/day is consumed.

A big drawback of omega-3 oils is their propensity to turn rancid and develop a characteristic fishy smell and taste. This rancidity is mainly caused by oxidation; the presence of enzymes and metal ions in the oil can catalyse the oxidation reaction. Levels of oxidation can be reduced by protecting the oil from atmospheric oxygen and/or by using a very pure oil for encapsulation. Using microencapsulated oils in the formulation can also help to prevent the degenerative process.

The biggest problem facing manufacturers of omega-3 supplements is the stability of the oils, and finding ways to limit their deterioration during processing. Oxidation is the main issue, but by no means the only one: chemical changes to the oil can also be brought about by exposure to light and heat, or by inadequate storage and handling procedures during processing.

At the root of omega-3’s instability is the high double bond content, as these have a propensity to react with atmospheric oxygen. The oxidative status of the oil can be quantified by testing the peroxide and anisidine values of the oil. The more double bonds the oils contain, the greater the risk of oxidation, and this is why oils with the highest levels of EPA and DHA are usually more likely to go rancid than those with fewer double bonds, such as oils that are richer in ALA.

The degree and rate of oxidation is affected by multiple factors. In addition to the presence of oxygen, these include light and heat, water activity, interactions with other chemical components and the presence (or absence) of substances designed to prevent oxidation. Fish oils are particularly prone to degradation, mainly because of the high levels of polyunsaturated DHA and EPA they contain.

As well as rendering the product unpalatable, oxidation may reduce its nutritional quality. It may also adversely affect safety via the formation of by-products, including aldehydes, ketones, acids and other complex molecules. Preserving the oil in its unoxidised form, as far as possible, is important for product quality and safety.

Once oxidation has occurred, it cannot be reversed, so prevention is key. One technique is to incorporate an antioxidant molecule alongside the oil to scavenge the free radicals that are produced during the oxidation process, stopping it in its tracks. Commonly used antioxidants that are compatible with foodstuffs and supplements include tocopherols; these are naturally present in some sources of omega-3 oils. Others include citric and ascorbic acids, and a range of spice extracts. Sometimes a blend of antioxidants is preferable to a single one to create a synergistic effect against oxidation, improving overall protection.

The second important way in which oxidation can be prevented is by protecting it from the atmospheric oxygen the reaction requires. For bulk oils, this can be achieved by storing it under a blanket of inert atmosphere, preventing contact of the surface of the oil with oxygen. This is, however, impractical for bottles of liquid oil supplied to consumers. Although they can be protected in this way for shipping, once the bottle is opened, the air gets in and the oxidation process will begin.

Not only is it important to protect the final product from oxygen, it must be carefully handled throughout the manufacturing process. Operating under a blanket of inert atmosphere (such as nitrogen or argon) will assist here, as will the incorporation of a suitable antioxidant into the oil.

The first step, clearly, is to source a high quality omega-3 oil raw material and determine the optimal antioxidant. There is no one-size-fits-all antioxidant, either in terms of chemical composition or dosage, because of the variation between sources and batches of omega-3. But, as standard practice, marine-sourced oils should be mixed with a suitable antioxidant to prevent degradation.

For the processing itself, it is important to implement a closed system for the transfer of the oil within the plant so that it remains protected by a blanket of inert gas throughout, including within the storage drums it is delivered in, and during transfer and processing.

Encapsulating the oil within a softgel provides an excellent way of ensuring that the oil remains protected from atmospheric oxygen once it leaves the factory, during shipping, on the store shelves and once the package has been opened by the consumer. It should be noted that the ultimate oxidation outcome, regardless of care during handling, will always be highly product-specific, thanks to the innate complexity of a multicomponent matrix. This is particularly true for products that have been designed to contain active ingredients or flavouring additives in addition to the omega-3s.

The modern form–fill–seal process, invented by Robert Pauli Scherer more than 80 years ago, is now used to manufacture most softgel capsules. First, two flat ribbons of a gel, with low oxygen permeability, are made in situ. These should be sufficiently thick to provide protection, but not so thick that they are difficult to work with or excessively costly in material terms. Historically, the gel material is animal derived, with the original bovine sources often replaced with porcine ones in light of the bovine spongiform encephalopathy (BSE) scare.

Fish skin gelatin can also be used, but this is significantly more expensive. More recently, vegetarian alternatives have been developed, notably using the seaweed-derived hydrocolloid carrageenan in combination with starch, usually sourced from potato or corn. Softgels using vegetarian materials are becoming increasingly popular, and are widespread in Southeast Asian countries. 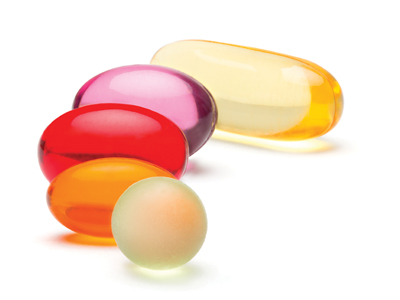 The ribbons are then brought together between two rotating dies with capsule-shaped indentations. The capsules thus formed are filled with the liquid oil via a nozzle, and sealed to provide an air-proof environment for the contents. It is also possible to modify their delivery profile by adding an enteric coating, which determines where in the gastrointestinal tract they will dissolve. By adding an acid-stable coating that dissolves in more alkaline conditions, the capsules can transit the aggressive environment of the stomach intact and then disperse their contents in the small intestine. This reduces the opportunity for reflux to occur, minimising the potential for unpleasant fishy aftertastes.

The softgels will then either be packaged in bottles or filled into blister packs, preferably under an inert atmosphere. Stability tests should be conducted on the final product to ensure there has been no adverse impact on the quality of the omega-3 oil during processing.

With so many consumers now relying on omega-3 supplements for their perceived health benefits, it is important that manufacturers ensure that the products they buy are high quality, and remain that way during storage. Careful manufacturing techniques and the optimal product delivery format are key.