Pycnogenol for cognitive function in children and healthy adults

Normal cognitive function is a prerequisite for a healthy life. Unfortunately, this is not always a given. Brain function may be either hyper- or hypoactive and, in both cases, quality of life can be impaired greatly. Dr Franziska Weichmann, Manager of Scientific Communications and Product Development at Horphag Research, reports 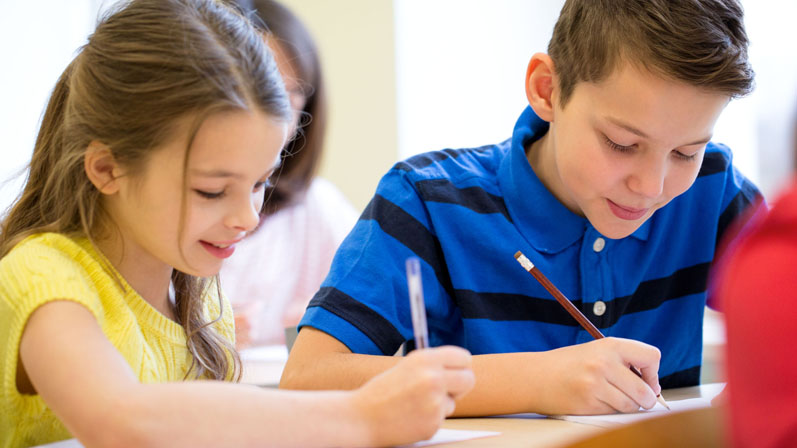 Hyperactivity is frequently observed in children, adolescents and even adults and is commonly referred to as attention deficit hyperactivity disorder (ADHD). Globally, approximately 5% of children are diagnosed with ADHD and an additional 5% are reported to have overactivity and inattention problems that sit just below the clinical threshold.1

By contrast, declining brain function (hypoactivity) with memory problems and mental performance deficits is often related to the ageing process. It has, however, also been described in younger people in chronically stressful school- or work-related situations, often leading to cognitive issues.2,3

Improving ADHD symptoms in children
ADHD is a frequent brain hyperactivity condition and the most common — and increasingly prevalent — behavioural disorder in children.12 A common medication for this condition is methylphenidate hydrochloride (MPH), sold as Ritalin, Concerta or Medikinet, for example, which is associated with various adverse effects.13

In a recently published double-blind, randomised, placebo-controlled clinical trial, children with diagnosed ADHD received either Pycnogenol, MPH or a placebo for 10 weeks.4 According to the teachers’ rating, hyperactivity and impulsivity were significantly improved by 34% with Pycnogenol and by 36% with MPH compared with the placebo (Figure 1).

Inattention was ameliorated as well with both remedies. However, MPH led to significantly more adverse effects in the children, including mood changes, gastrointestinal symptoms, insomnia, headache and a feeling of tachycardia.

Additionally, MPH led to appetite suppression and significant weight loss in the children. With Pycnogenol, a physiologically appropriate weight gain for this age group was observed.5 The researchers concluded that with the almost complete lack of adverse effects, Pycnogenol is a good and efficacious alternative for MPH in children’s ADHD, especially in the school environment.

Figure 1: Efficacy of Pycnogenol and MPH on hyperactivity/impulsivity and frequency of side-effects in children with ADHD after 10 weeks

Another double-blind, randomised, placebo-controlled clinical study showed that Pycnogenol intake for 4 weeks relieved hyperactivity and improved the attention of children with ADHD significantly (compared with a placebo and baseline).6

Hyperactivity and attention were ameliorated by 18% and 14%, respectively, as rated by parents and by 16% and 10% as rated by teachers (Figure 2). In the placebo group, no significant effects were observed and no side-effects after Pycnogenol supplementation were reported.

DNA damage incidents as measured by levels of 8-oxoG as a representative of oxidatively damaged purines were significantly reduced by 6.3% and 35.4%, respectively.8 In addition, Pycnogenol normalised the total antioxidant status and improved glutathione levels — an index for antioxidant capacity in children with ADHD.9 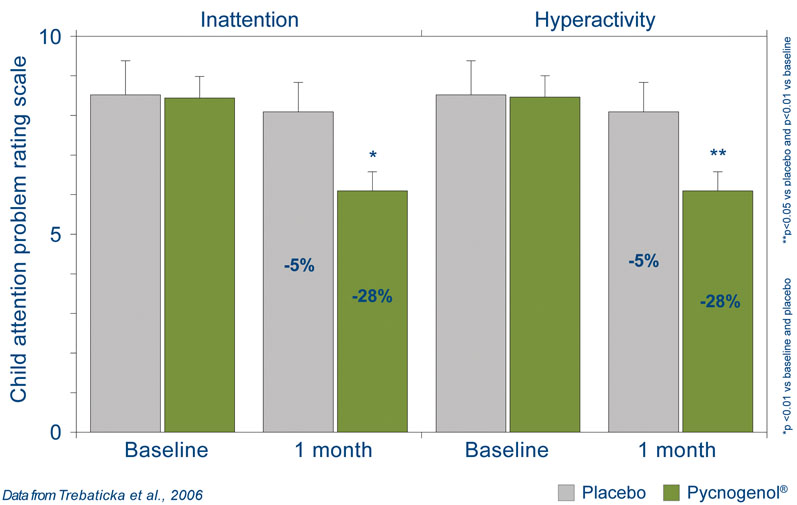 The students showed significantly improved attention in the form of better serial addition abilities (+52.9% versus +4.7% in the control group) and increased memory skills (+35.8% versus +4.5% for picture recall, +11.1% versus +1.3% for pattern recognition memory and +19% versus 10.5% for spatial recognition memory).

The real and practical effectiveness of Pycnogenol supplementation on cognitive performance has been confirmed by evaluating the marks obtained by students in academic exams during the second month of treatment. The exam scores of the supplemented students were better by 7.6% compared with those from the control group.

These results have confirmed Pycnogenol’s beneficial effects on the mental performance of healthy students. 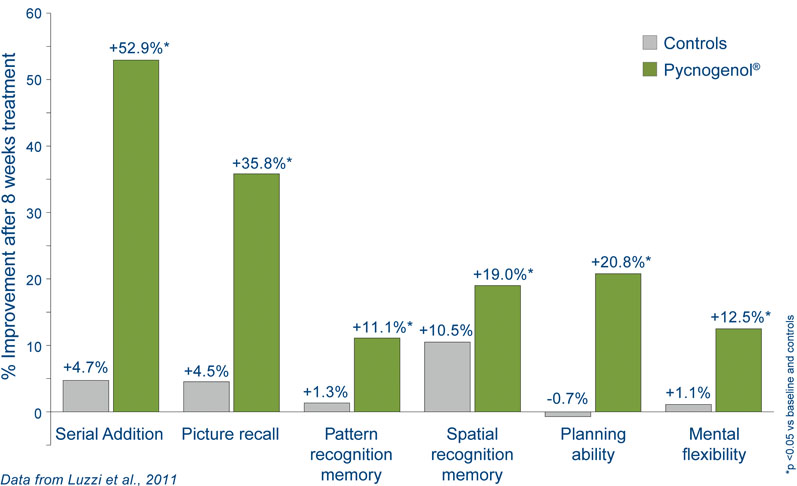 Among other items, improvement of attention (+13.4%), mental performance (+8.9%) and memory (+3.6%) were determined after Pycnogenol supplementation (Figure 4). Overall cognitive function was improved by 10% in the Pycnogenol subjects compared with a slight increase of 4.3% in the control group.

No significant changes were found in the control group. Additionally, plasma oxidative stress levels were measured (as plasma free radicals) and showed to be elevated at the beginning of the study, probably because of negative daily stress.

After 12 weeks of supplementation with Pycnogenol, a significant decrease of 30.4% to normal levels compared with a slight increase in the control group of 0.8% was measured. 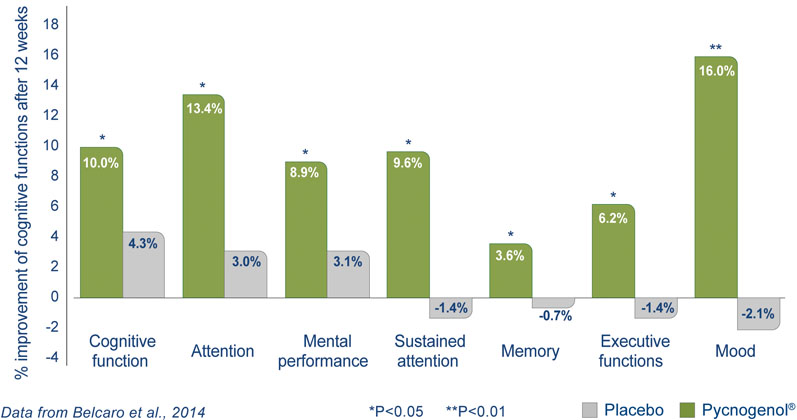 Pycnogenol regulates cellular NO concentration
The underlying mechanism of action of Pycnogenol is based on its ability to regulate the endothelial function by adjusting nitric oxide (NO) production.14,15 It has been shown that NO has beneficial effects on brain function.16

NO is capable of relaxing constricted blood vessels, normalising blood pressure and helping to protect tissues from the damage caused by low blood supply.17 By regulating vascular smooth muscle relaxation, NO leads to increased blood flow, which ensures a sufficient supply of oxygen to neuronal cells.18

In addition, NO has been found to regulate neuronal functions and helps to modulate key neurotransmitters, thus contributing to processing signals in the brain.19,20

Interestingly, the active metabolites of Pycnogenol build up inside the endothelial blood cells and, possibly, pass the blood-brain barrier.15 The beneficial effects of Pycnogenol on endothelial function have been shown in several clinical studies.14,21,22

Pycnogenol regulates NO production in two ways. The endothelial NO synthase (eNOS), which generates normal concentrations of NO from L-arginine in the cell, is stimulated by Pycnogenol.23

At the same time, Pycnogenol prevents a toxic overproduction of NO by downregulating the inducible NO synthase (iNOS) — a well-established source of nitric oxide during inflammation.15 In this way, Pycnogenol naturally modulates the multiple effects of NO in the brain.

Pycnogenol controls inflammation and oxidative stress
As mentioned earlier, repeated stressful situations can have a negative effect on cognitive function.2,3 It has been shown that this effect is derived from destructive brain inflammation, along with the oxidative damage triggered by social, psychological or physical stress.24–26

In several studies, it was shown that Pycnogenol has potent anti-inflammatory and associated antioxidant activity.8,27–31 After just 5 days of daily intake, a study reported that Pycnogenol significantly prevented the upregulation of the proinflammatory enzymes 5-LOX and COX-2.27

In another ex vivo study, the plasma samples of volunteers who’d taken Pycnogenol were shown to statistically significantly inhibit NF-κB activation by 15.5% and matrix metalloproteinase 9 (MMP-9) release by 25% — two important regulators in the inflammation process.28

In a similar study, the statistically significant inhibition of inflammatory molecules COX-1 and COX- 2 was observed after intake of 300 mg of Pycnogenol.29 In conclusion, Pycnogenol French maritime pine bark extract is a safe, natural and evidence-based solution to support healthy cognitive function.