“Turmeric” which is curcuma longa L., has been used for at least 2500 years, mostly in India and China. 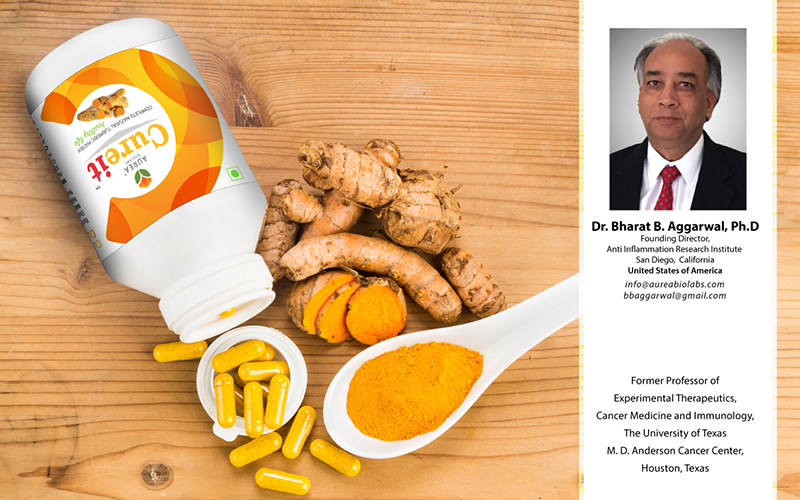 Turmeric has a long tradition of its use in food, medicine, cosmetics, etc. Although there were many research work has been published about curcumin, which is obtained from turmeric, comparatively little is known about turmeric itself. Studies revealed that there are more than 250 bioactive molecules in turmeric other than curcuminoids.

Natural product research found that there is a good synergetic interaction between other active molecules like proteins, dietary fibers etc., with curcuminoids. Now, it is also believed that the activity of curcumin is maximum when it is inside the turmeric matrix, because some of the activities of turmeric can be mimicked by curcumin, other activities are curcumin-independent. Out of the many bioactive molecules present in Cureit/Acumin, the prominent molecules are listed below, which are only present in this curcuminoid formulation. 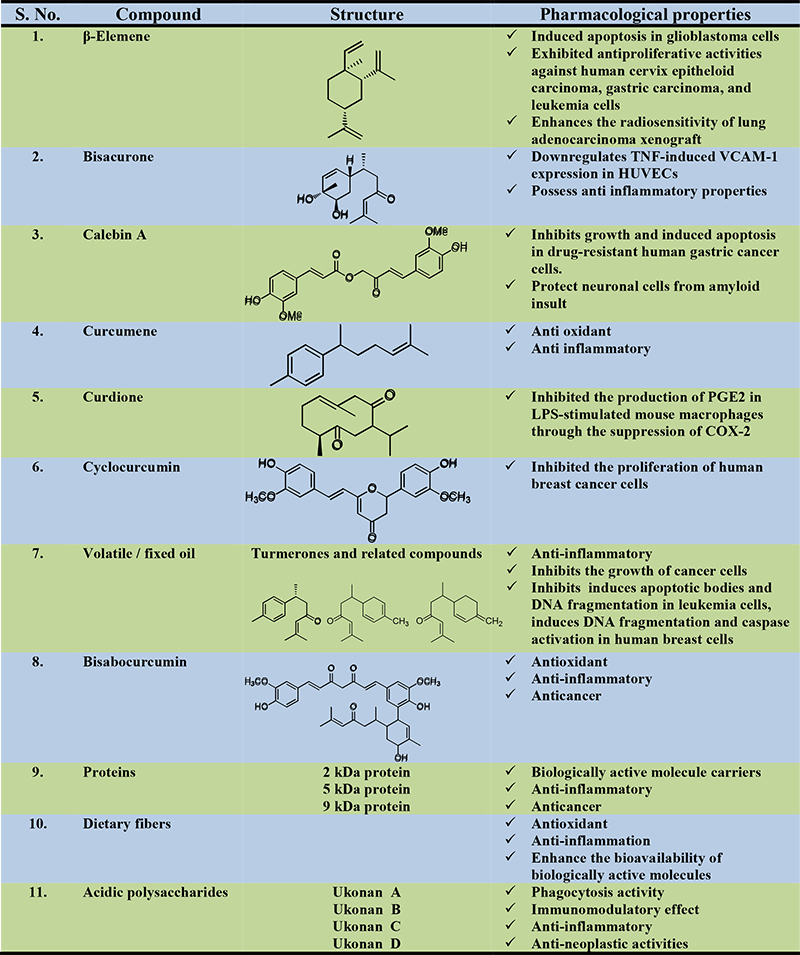 During the absorption of any nutrient molecule irrespective of its source, must traverse the inner intestinal wall to gain access to the blood stream. It must pass through the walls of the surface epithelial cells, behind which are capillaries through whose walls it must also pass. All cell walls are made of lipids, and the molecules most easily absorbed through them are of like fat – soluble.

The curcuminoids lies in this catogory. But because the curcuminoids are fat soluble and not water soluble, they tend to arrive at the cell walls in the form of relatively large, undissolved particles rather than as induvidual molecules. Such molecules (molecular aggregates) are very poorly absorbed. In the case of water soluble molecules, it would be readily absorbed, because they arrive at the cell walls as individual molecules.

Whether the nutrient molecules are taken with or without food often makes a difference, owing to the absorption- enhancing or absorption inhibiting effects of other compounds in the intestinal soup. Aurea biolabs developed the bioavailable curcumin – Cureit/Acumin based on this concept.

A study has been coducted to compare the plasma bioavailability of total curcuminoids of three different curcumin formulations in healthy male adult after single oral dose. The novel ‘curcumin inside the natural turmeric matrix’ formulation contains curcuminoids with turmeric proteins, fibers, minerals, carbohydrates and essential oil of turmeric (Cureit/Acumin).

It was concluded that the different curcumin formulation containing turmeric proteins, fibers, minerals, carbohydrates and essential oil of turmeric (Cureit/Acumin) is not only safe and well tolerated by healthy human volunteers but also exhibited statistically significant higher bioavailability relative to the curcumin formulations with volatile oils of the turmeric rhizome and phospholipid complex. The adjuvants like fibers, essential oils or carbohydrates enhance the bioavailability of the phenolic compounds considerably.

The graphical representation of the mean concentrations (ng/mL) of the three formulated curcuminoids at different intervals of time.

A study conducted in rheumatoid arthritis (RA) shows that Cureit/Acumin can provide significant improvement in treatment efficacy in active RA. Active rheumatoid arthritis patients, who received Cureit/Acumin (500 mg X 2) for a period of 90 days, reported statistically significant change/decrease in their clinical symptoms towards the end of the study. 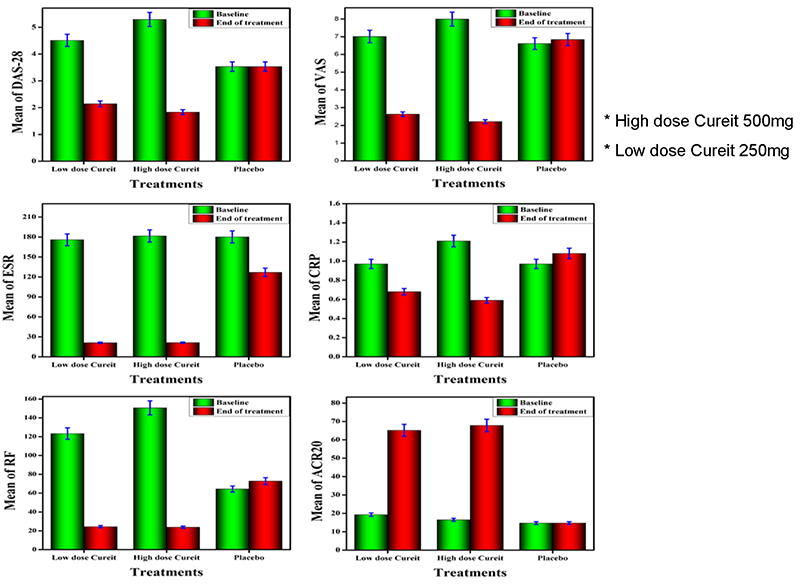 This was evident from changes in the ACR Response, DAS 28, HAQ DI, QOL-SF36, VAS questionnaires administered by the physician/designee. Even the CRP, ESR and RA factor values reconfirm the efficacy results. Therefore, it is concluded that a standardized extract of Cureit/Acumin is safe and efficient in the management of rheumatoid arthritis. So Cureit/Acumin acts as very efficient analgesic, anti-inflammatory, and efficient in the management of RA. This result shows the importance of having a curcuminoids with complete turmeric extracts as there are many anti-inflammatory molecules acts synergistically with curcumin.

Cureit/Acumin is more potent than the curcuminoids alone and it can interact with multiple molecular targets involved in a wide variety of diseases.

Cureit/Acumin meets great promise, safety, efficacy, and affordability. In vitro, in vivo, and human clinical studies have all established promise of Cureit/Acumin and revealed its therapeutic value.