A cocktail of nutrients

“Since we last spoke,” says Sofia, “we have been restructuring the team and the company, and redefining our corporate strategy. So, now, Allmicroalgae is part of a two-pronged project, led by the cement company, Secil, but we remain 100% focused on our overall business directives, including the commercial development of the microalgae Chlorella vulgaris, which means communicating with and educating our customers and business partners about its applications and benefits.”

“What we’re noticing in the market is ongoing growth in terms of levels of interest in Chlorella from the food industry. So, not only are we getting enquiries from dietary supplement companies, we also have people from the food and beverage markets wanting to know how they can work with microalgae, what strains they should use and what applications are available. For example, they want to know how to incorporate Chlorella into bakery products and understand what benefits that might deliver,” she notes, adding: “Here at the show, we’ve even had a representative from a milk/dairy organisation asking for samples, looking for an innovative edge and wishing to add nutritional value or a health halo to their existing products.”

Sofia feels that aspects such as Chlorella’s protein content, vegetarian provenance and sustainability are contributing to the rising levels of interest in this microalga. “As well,” she adds, “it’s a species that has been consumed by humans for a very long time. It might not be as well-known as Spirulina sp., for example, but there’s an established history of use.

Plus, unlike Spirulina, Chlorella has a cell wall, which contributes to the detoxifying functionality for which Chlorella is renowned. In terms of total protein concentration, our plant-based product comprises more than 55%, making it suitable for the vegetarian market; it also contains trace minerals, vitamins and certain antioxidant pigments, including chlorophyll, beta-carotene, lutein, zeaxanthin and so on.” 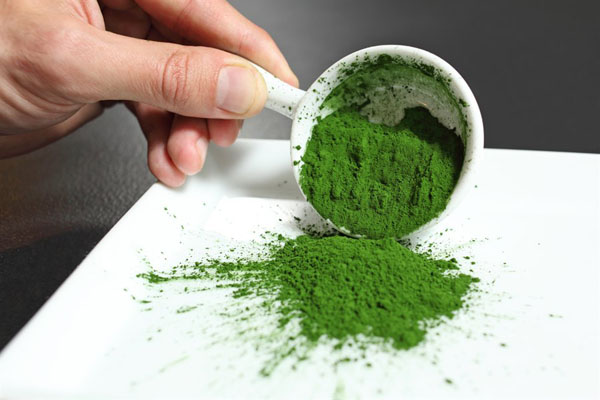 “Our particular Chlorella sp. powder offers a cocktail of nutrients; and, according to the remit of the European Commission (EC), we can market our products in the European Union (EU) as a food ingredient and dietary supplement. This is because we work with Chlorella vulgaris, whereas other microalgal species, which aren’t on the EC list, can’t be sold for human food consumption. In the EU, you need to be sure that you’re working within the boundaries of those definitions; otherwise you have to make a Novel Food submission, which makes life a little more complicated,” she observes.

I asked Sofia whether the increased levels of interest had affected their scale-up and production activities. “Yes,” she confirmed: “We’re continuing to use the photobioreactor systems, but we’ve enlarged our greenhouse facilities and created a fermentation warehouse. We’ve added fermentation to the production process because it gives us even more control over the cultures, so we expect to get an even more standardised final product, but it will also give us a tremendous boost in terms of the volumes we can achieve.”

“We’ll always rely on the sun-driven process to grow our algae because we recognise how it affects the accumulation of the phytochemicals, particularly the pigments. But, we might introduce fermentation into the production process at some point, such as for the feed market, which is another area in which we’re starting to gain a foothold with our Nannochloropsis sp. product, which we are scaling up autotrophically. For Chlorella, though, we’ll always stick with the photosynthetic process, but fermentation, being a more flexible technology, adds another string to our bow and enables us to experiment with the protein or lipid levels and compare the overall nutrient profile.”

Returning to the topic of the company’s strategic plans, Sofia explains that Allmicroalgae has previously done a lot of work in the European dietary supplement market, trying to communicate directly with the organisations that receive a significant percentage of the company’s production output.

“Now, we’re targeting the food ingredients market as well, which is, little by little, starting to recognise the value of microalgae and becoming more interested in using it. This is quite a fascinating development,” says Sofia: “Three years ago, when I was virtually knocking on food company doors, they were barely aware of microalgae and/or what to do with it. Now, the pendulum is swinging the other way and food companies are approaching us! The fact that the production plant is now ISO 22000 and Kosher certified is also playing an important role by highlighting the company’s merits to even the most demanding customers.”

“Given that we now have fermentation capabilities, we can respond to these enquiries and commit to delivering higher volumes. In addition, we’re directing our sales and communication efforts towards the feed markets, such as aquaculture and livestock applications. Furthermore, a number of pet food companies have expressed an interest in using sustainable, plant-based ingredients." 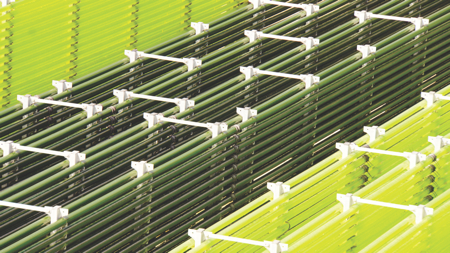 "So, the inclusion of feeds within our target market portfolio is a novel development, and the other part of the global project — led by Secil’s activities in the cement industry — consists of studying different microalgal species to examine carbon dioxide fixation. Those are out two main drivers at the moment,” she says.

“Of course, for our overall microalgae activity and everything we sell, it will all be produced using food-grade CO2. The cement-derived CO2 will only be used for research and development purposes, with the resulting biomass being directed to biochemicals and bio-oils,” reassures Sofia. Looking Ahead The future’s looking pretty good, I suggest, and Sofia agrees: “Besides being an intriguing area to work in with enormous potential, the field of microalgal cultivation is growing in importance in terms of nutrient sustainability and our ability to feed the planet’s billions of people.”

“We can seriously compete with the fish oil and meal suppliers, both in the provision of omega-3 fatty acids for humans and what they provide to the feed markets. Volumes are decreasing and prices are increasing; and although there are alternatives such as sunflower and soya, the protein profile is not exactly the same and many sources are genetically modified. By contrast, microalgae are sustainable, 100% plant-based, non-GMO and completely natural.”

“But, of course,” she states, “it’s up to us and other microalgae producers to guarantee a good supply and keep the costs down, making our products economically sustainable as well.”

Regarding other players in the market, Sofia acknowledges the arrival of several start-up companies who are investing time and resources into understanding how they can produce microalgae. However, she notes, it takes a lot of time; and, depending on the species you’re working with, factors such as location, local biodiversity and ambient environment all play significant roles in whether your cultivation will work or not. There are a lot of competitive elements that are nothing to do with business and finance!

There are also a lot of extant producers, particularly in Asia, as well as in Europe, so the European market is very well served in terms of volume. “At this stage, though, we’re nowhere near commercial saturation. We all need to produce more, educate both food companies and consumers, and anyone looking for plant-based alternatives to nutrients.” There’s a healthy level of competition out there at the moment, admits Sofia, “but there’s still plenty of room for everyone.”