A perfect match for tablets

Tablet formulators currently have access to several directly compressible excipients. Each of these has its own advantages and disadvantages — such as poor compactibility, low flowability, slow disintegration, lack of stability or inferior organoleptic properties.

The choice of platform is crucial, but it can be difficult to find a multifunctional excipient that combines high stability, compactibility and loading capability.

With Omyapharm 500-OG, formulators can overcome this challenge. Manufactured using a recrystallisation process, this highly structured mineral is based on calcium carbonate and tribasic calcium phosphate.

The final particles are characterised by an external lamellar structure and an internal network of interconnected pores. Compared with other porous excipients, this structure provides plenty of surface contact points among the particles, ensuring interlocking during dry granulation in roller compactors, which results in stable mechanical binding.

Researchers compared the compactibility properties of this highly structured mineral against other common excipients.1 Tablets manufactured with the excipient in powder and granule form were compared with conventional calcium carbonate, mannitol or microcrystalline cellulose (MCC) tablets.

They also had a higher porosity than those containing the other excipients tested. With the mineral excipient in the formulation, tablets were able to reach comparable or higher hardness values than other formulations at lower compression forces. This allowed their porosity to remain higher than 50% and provided a large volume of voids to accommodate active pharmaceutical ingredients (APIs). 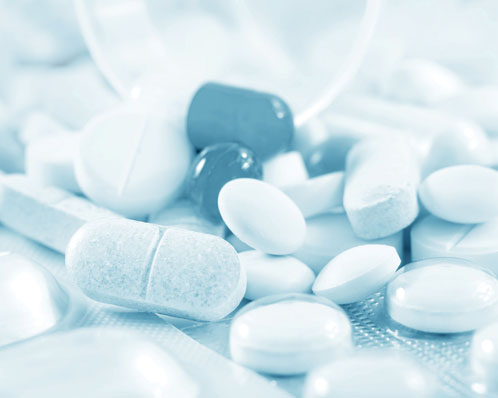 In a study conducted in 2017, scientists confirmed the ability of Omyapharm to formulate orally disintegrating tablets (ODTs) with an enhanced mouthfeel and examined the acceptability of these among healthy volunteers.2

ODTs are designed to dissolve in the mouth within seconds without the need for water. Because of their convenience, this dosage form has clear advantages for paediatric, geriatric and psychiatric formulations.

The researchers found that the tablets — in correlation with the in vitro model — disintegrated fast in vivo. Mouthfeel was assessed using a 10-step visual analogue scale (VAS), whereby 0 represented the most positive answer the volunteer could choose.

In addition, eight different questions concerning the mouthfeel and taste were asked. After that, the participants gave their comments about the sensations experienced while taking the different tablets.

It turns out that there is an optimum speed of disintegration. If the water uptake phase is too quick, it is often associated with drying of the mouth, which may create discomfort for the patient. The best sensation is when the disintegration starts quickly upon contact with a small amount of saliva and lasts less than 30 seconds.

After disintegration, the optimum texture is one that gives the patient the feeling that the tablet has turned into syrup. Insoluble ingredients have to be as small as possible to avoid a sandy feeling in the mouth. A short disintegration time requires specific excipients that differ to those used in other oral dosage forms.

In this study, the tablets with Omyapharm were well accepted. Some of the volunteers described the feeling of the ODTs as “nice” and “sparkly.” There were no negative descriptions given by any of them. Additionally, despite the high mechanical stability of the tablets, the high porosity required to absorb the liquid necessary for disintegration was preserved. These findings led to the conclusion that the mineral excipient is highly suitable for ODT dosage forms and can additionally impart a pleasant mouthfeel.

It is the mineral excipient’s direct compressibility into granules without the use of a binder and its high porosity that allows faster water uptake, which leads to a disintegration time that is twice as fast as the market reference product. In fact, ODTs manufactured with Omyapharm disintegrate in less than 10 seconds.

Another recent study shows that the mineral excipient is also suitable for the delivery of proteins.3 In this work, Omyapharm was loaded with biomolecules such as lysozyme and bovine serum albumin to investigate its suitability to deliver protein-based drugs.

The delivery of biologics, such as therapeutic proteins, critically depends on the availability of formulation strategies that can be used to direct these macromolecules to target tissues.

The structural and functional integrity of the biologics also have to be preserved during manufacturing and storage. Loading efficiency for the study’s model proteins was more than 90%.

The structure of the model macromolecules was not affected by the loading process or the interaction with the surface of the mineral excipient, as confirmed by circular dichroism analysis. Moreover, enzyme activity of the model proteins after loading was demonstrated by Michaelis-Menten enzyme kinetic experiments.

Several studies have shown that Omyapharm is a versatile carrier with unique properties and processability. With this natural mineral excipient, fast disintegrating tablets, granules, floating and mucoadhesive drug delivery systems, as well as microencapsulated products, can be developed.

Unlike many similar materials, the highly porous excipient has the advantage of being biocompatible. Its composition is basically that of bone mineral: hydroxyapatite and calcium carbonate. It also offers multiple functionalities and enables straightforward granule and tablet manufacturing.

ODTs manufactured with this mineral excipient do not require cost-intensive production equipment because they can be produced by direct compression. Their high mechanical strength enables the use of regular bottles as packaging, which significantly reduces the overall cost of production compared with other ODT technologies. Bearing all of these advantages in mind, Omyapharm is a very promising excipient for oral dosage forms.