How Robuvit can help with mood swings, restless sleep, stress and fatigue

Multifaceted conditions such as chronic fatigue can affect anyone at any stage of life, regardless of age, sex or socioeconomic status. Symptoms range from poor quality sleep to a lack of energy, exhaustion, muscle fatigue and various other problems for which there are as yet no treatment standards. A standardised oak wood extract supplement may offer a solution, reports Dr Franziska Weichmann, Manager of Scientific Communications and Product Development at Horphag Research 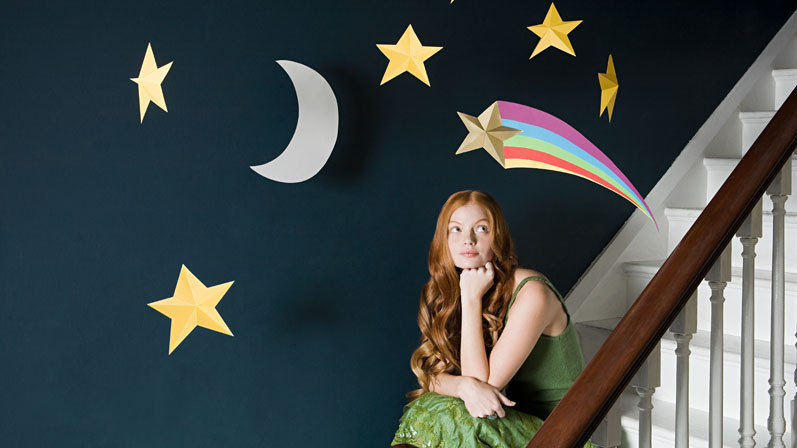 In prehistoric times, stress helped our ancestors to focus on danger. By increasing the heart and breathing rate, releasing hormones such as adrenaline and by providing more blood and oxygen to muscles (and less to the digestive tract), stressful situations prepared the body for a “fight or flight” response.

Nowadays, we react in a similar way when under pressure at work or feeling unsecure when facing life changes or traumatic events. Such stressful situations can trigger — or worsen existing — disorders, diseases or pathological conditions.1

Robuvit, a standardised extract of French oak wood and a registered trademark of Horphag Research has been shown to help people to better deal with stressful situations, mood changes and fatigue.3–15

Dealing with burnout and work-related stress

A continuously high level of stress can culminate in work environment burnout. This condition comprises emotional exhaustion and a decreased sense of personal accomplishment.16 Robuvit was given to people suffering from burnout syndrome derived from particularly stressful circumstances.3

The study comprised surgeons in training as well as senior professionals and managers. Their burnout symptoms were assessed by a survey form, including satisfaction at work, level of intolerance, emotional drainage and fatigue. After 4 weeks of daily Robuvit intake, the burnout symptoms were significantly relieved in comparison with the control participants (Figure 1). 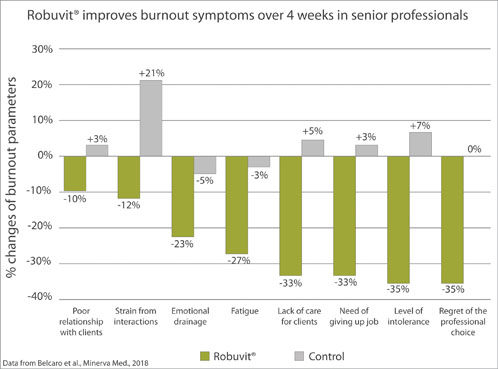 In a newly published study, nurses experiencing high levels of professional stress took Robuvit for 4 weeks.4 Burnout in the healthcare system is a common problem, with 10–70% of nurses and 30–50% of physicians and assistants being affected.16

The COVID-19 pandemic has exacerbated this phenomenon.17 Supplementation with Robuvit led to a significantly higher ability to deal with long hours and pressure at work. In addition, study participants showed an improved attitude and ability to deal with their working environment (in terms of punctuality and respect towards their colleagues). The desire for self-improvement and interest in learning new skills were ameliorated as well after Robuvit intake.

Post-traumatic stress disorder (PTSD) is a very severe form of psychological trauma that, if left untreated, can last for months or even years. Traumatic events such as, but not limited to, natural disasters, accidents, pandemics, loss of loved ones, combat or assault can induce nightmares, flashbacks, anxiety, depression and fatigue.18

In a clinical trial, patients suffering from PTSD were supplemented with Robuvit for 4 weeks. Robuvit was able to reduce the percentage of subjects suffering from recurrent nightmares, memories and intense emotional distress; it also improved sleep and reduced fatigue.5

clinical study investigated the effect of 300 mg of Robuvit per day on energy levels, excluding any other flavonoid consumption. After 4 weeks, the healthy participants stated a significant improvement in energy levels (8.8%) as well as a significant reduction of tiredness (12%).6

The individuals further reported improved calmness, less stress and a higher level of motivation. Another study with 40 individuals suffering from fatigue, insomnia and mood alterations showed clear improvements in the indicated conditions, compared with control participants, after taking Robuvit for 8 weeks (Figure 2). The supplemented subjects had significantly improved mood, felt fitter in the morning with no fatigue during the day and claimed to have slept 33% more.7 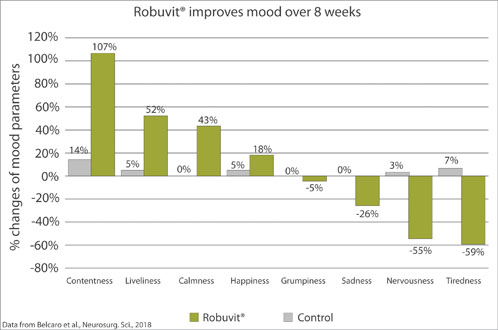 One of the most debilitating forms of tiredness is chronic fatigue syndrome. People that suffer from this not yet fully understood disorder report persistent tiredness and exhaustion, restless sleep, muscle and joint pain, dizziness and difficulties with memory and concentration.19

In addition, mood and anxiety disorders are more prevalent in people with chronic fatigue disorder than in others.20 In a study with patients who suffer from chronic fatigue syndrome, it was shown that Robuvit could relieve some of these symptoms.

After 4 weeks of regular Robuvit intake, signs and symptoms of bad mood and fatigue were significantly alleviated, compared with the control group, and the participants’ energy levels were increased by 48%.9 Another study (6 months of daily supplementation with 300 mg of Robuvit) with subjects with chronic fatigue syndrome for confirmed these positive effects.8

Unrefreshing sleep was significantly reduced by 44%, compared with an increase of 13% in the control group. Problems with short-term memory was reduced by 29% and the mood of the participants taking Robuvit was significantly improved — with a 58% reduction in depressive feelings and 49% fewer mood swings. The control patients showed minimal effects or even slight deterioration.

Patients with mild heart failure also suffer from increased chronic fatigue. A study showed that tiredness in affected people was relieved by 58% after Robuvit supplementation for 12 weeks, compared with 7% in the control group, as assessed by the modified fatigue impact scale.10

A less severe and more self-inflicted problem that includes fatigue and weakness is hangover. Robuvit was given to people with acute hangover. After 12 hours, the Robuvit group was significantly less fatigued, less weak and showed fewer problems with pain.11 The evaluation of the global mood, including depression, anxiety and irritability, showed significant improvement by 55% with Robuvit compared with an improvement of 28% in control patients.

One last study that investigated the effects of Robuvit on fatigue and energy levels was done with men in their fifties and sixties with problems regarding vigour.12 The number of people suffering from lethargy, weakness, inactivity and laziness levels decreased. By contrast, their energy levels, enthusiasm, verve, mental vitality and even erectile function increased during the 4 weeks of regular supplementation (as evaluated by the participants).

Improved recovery and convalescence after disease or operation

Physical health conditions following surgical interventions or viral infections are very often associated with fatigue and mood swings. Robuvit was given to patients after they had an operation or a disease, resulting in increased energy levels and improved recovery.13–15

A recent study investigated the effects of Robuvit on patients recovering from hysterectomy (the surgical removal of the uterus).13 The women started supplementing 3 days after the surgical intervention. The group that took Robuvit for 4 weeks showed significantly improved mental and general health compared with control patients by 12 and 18%, respectively.

The energy levels of the women of the Robuvit group increased by 3% compared with a decrease of 10% in the placebo group.

The investigators suggested that Robuvit could be used to relieve post-operative symptoms, particularly including mental health problems. In another study, patients who’d had acute flu symptoms were given Robuvit and monitored for 3 weeks.14

The test subjects claimed to have improved signs of convalescence, including a reduced level of weakness (25%) compared with control patients, improved sleep (24%) and higher levels of attention and concentration (approximately 50%) than the control subjects.

Overall, patients convalescing from a viral disease were shown to have benefits regarding energy and attention when taking Robuvit. Another viral disease that commonly leads to long-lasting fatigue is infectious mononucleosis, which is transmitted through the Epstein-Barr virus.

Mechanisms of Robuvit to improve mood and stress levels

Robuvit has been shown to increase the energy capacity of individuals in several clinical studies.21 A particular metabolite, urolithin A, promotes the increased generation of new mitochondria.22 Mitochondria are the powerhouses of the cell, where the sugar that we eat gets converted into adenosine triphosphate (ATP) to provide the energy that drives many cellular processes. 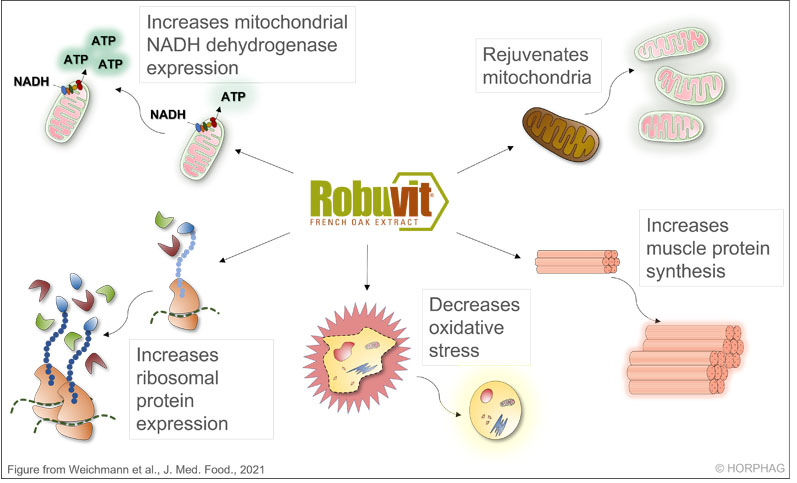 In addition, Robuvit helps to improve energy metabolism by boosting ribosome production (Figure 3).23 Ribosomes are responsible for the production of proteins that generate messenger hormones, enzymes, muscle fibres and others, including signalling proteins needed to fight challenging mental health conditions.

Furthermore, inflammation was suggested as being involved in the development of mood and anxiety disorders.24 Robuvit supplementation was shown to decrease inflammatory marker CRP in the blood of patients by 64% compared with a 39% decrease in control patients.25

Additionally, as inflammation and oxidative stress are very closely related pathophysiological processes, the antioxidant capacity of Robuvit appears to be helpful in this context as well.26,27

In summary, Robuvit is an oak wood extract that helps to manage mood problems and stressful situations. These effects have been shown in clinical studies in patients suffering from mood swings, fatigue, burnout syndrome and during convalescence. The results show that Robuvit helps people to better manage demanding and frustrating situations while improving their overall energy level and mood.