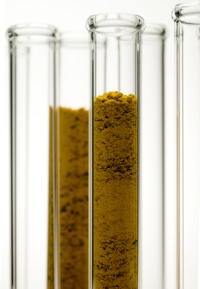 The present study “was designed to compare the effects of acute treatments of [65% curcumin] and/or SLCP [Longvida with 20% curcumin] on anti-inflammatory activities, Aß plaque loads and neuronal morphology in different brain regions of 5xFAD mice.”

This study indicates “the low solubility in body fluids and rapid degradation after intestinal absorption limit the bioavailability of [unformulated] curcumin, reducing its clinical utility.

However, the use of SLCP, a lipidated formula of curcumin shows significant promise in providing greater neuroprotective effects.

In the present study, we observed that SLCP tended to have greater affinity to Aß plaques, compared with [unformulated] curcumin.

Our findings suggest that the lipid bilayer of SLCP facilitates its permeability into the brain.

Although it is known that many researchers have conducted both in vitro and in vivo work in both animals and humans, many studies have utilised chronic treatment to overcome the major obstacles of delivering therapeutically significant amounts owing to poor solubility, instability in physiological fluids and low bioavailability.

In this study, Maiti and team brought to light additional research showing the benefits of acute treatment with curcumin in a murine model for either 2 (two) or 5 (five) days.

This publication adds to previous research and finds Longvida SLCP as a “potent, antiamyloid and anti-inflammatory natural polyphenol.

“Interestingly, we achieved greater anti-inflammatory effects in the case of SLCP [Longvida] treatment, which, again confirmed that the SLCP facilitates permeability of curcumin across the blood brain barrier (BBB) … to a greater degree than [unformulated] curcumin.”

They go on to conclude that SLCP provided greater neuroprotective effects compared to [unformulated] curcumin in 5xFAD mice.

“Moreover, we have compared the permeability of curcumin in different cells, such as 7-DIV primary hippocampal neurons and N2a cells and found that SLCP tended to deliver more free curcumin into the cells than did [unformulated] curcumin.”

Furthermore, the researchers note that 5 days of treatment had greater impact than 2 days in both groups, suggesting that a longer duration can better optimise the tangible health benefits seen.

“Not only is it very exciting to see these results from Maiti et al., but it is absolutely fantastic to have additional support for our previous research efforts on Longvida,” states Kristen Marshall, Marketing Co-Ordinator, Verdure Sciences.

Sonya Cropper, VP of Innovation & Marketing at Verdure Sciences, stated: “This publication highlights the potential impact Longvida (SLCP) has on various neurological measures, with valuable insight into the difference on permeability and specific activity between curcumin and solid lipid curcumin (Longvida).

"The continued interest in curcumin from the research community will continue to bring a greater understanding on potential benefits, as well as the difference regarding various optimising technologies.”

The key to the success of Longvida lies within the patented and proprietary Solid Lipid Curcumin Particle Technology, or SLCP. This technology encapsulates the free curcumin in Longvida in a trilipid matrix, allowing it to enter the bloodstream and cross the blood brain and blood retinal barriers.