There is growing recognition that vitamin K2 plays a crucial role in lifelong bone health, and that bone health may be just the first chapter in a developing K2 story, reports Jim Beakey, Marketing Director, Kappa Bioscience AS

Vitamin K2 is necessary for the activation of osteocalcin, a protein that transports and integrates calcium into bone to ensure a healthy skeleton. Incorporating calcium into the bone matrix means that less calcium is available for harmful deposits in soft body tissues. Recent studies suggest that dietary intakes of vitamin K2 among the general population are inadequate and that vitamin K2 supplementation may improve bone health and reduce the healthcare costs associated with osteoporosis.

Recently, the health benefits of MK-7, a form of vitamin K2, have received considerable attention. This article focuses on the use of MK-7 as a dietary supplement to promote bone health, as well as some of the other potential advantages of MK-7 supplementation.

In 1935, Danish scientist Henrik Dam described a fat-soluble factor that reduced bleeding in chicks fed an extremely low fat diet. He named it vitamin K after the German word for coagulation (koagulation).1 A few years later, American biochemist Edward Adelbert Doisy determined the chemical structure of vitamin K and succeeded in synthesising it. For their pioneering work, Dam and Doisy shared a 1943 Nobel Prize.

Decades later, the understanding of vitamin K has evolved with the recognition of two primary forms of vitamin K, each with very different contributions to human health. Vitamin K, specifically the vitamin K2 form, plays a significant role in the maintenance of healthy bones, and we are only beginning to appreciate the full extent of its impact on human health.

The two forms of vitamin K are vitamin K1, discovered by Dam and Doisy (also known as phylloquinone), and the more recently recognised vitamin K2. Vitamin K2 comprises a group of 10 molecules with side chains of 4–13 isoprenoid units, mostly unsaturated, and are called menaquinones. These were first identified in the 1950s. Researchers subsequently identified gut bacteria as a major driver of vitamin K2 conversion (from K1). Vitamin K2 was then largely overlooked before being ‘rediscovered’ in the last 15 years as an important factor in bone and cardiovascular health.

Humans rely on their diet to provide vitamin K2 as several factors limit the amount of K2 that can be converted from K1. Foods such as fermented cheese are the richest source of vitamin K2 in Europe.2 Worldwide, the food richest in vitamin K2 is soybeans fermented with the bacterium Bacillus subtilis. The most well-known example is the traditional Japanese food, natto, but fermented soybeans produced in a similar way are also consumed in Korea, China, Thailand and India. Dr Kate Rhéaume-Bleue, a leading advocate of vitamin K2 supplementation, has hypothesised that refrigeration has reduced the role of natural fermentation in food preservation, thereby reducing the amount of K2 in the Western diet.3 K2 deficiency may be an unseen consequence of living in an industrialized society.

Osteoporosis and the importance of healthy bone

Bone is not a static material: it undergoes constant regeneration through the synthesis of new bone and the removal of existing bone. In this way, the skeleton replaces itself about every 7 years. Two types of cells control this remodelling process: osteoclasts and osteoblasts. Osteoclasts remove old or damaged bone by a process called bone resorption, whereas osteoblasts synthesise new bone. Bone health is highly dependent on the balance between bone resorption and formation. When bone is digested more rapidly than it is synthesized, the skeleton can become fragile.

Bone mass increases in humans from childhood before beginning to decline from age 30–40 onwards. After this age, it is natural for the risk of fracture to increase and our ability to recover from fractures to decline. More serious risk is introduced with bone-weakening conditions such as reduced bone mineral density (BMD) and osteoporosis, a disease in which BMD is low. An estimated 200 million people worldwide have osteoporosis, a condition that affects three times as many women as men.4 Unsurprisingly, a third of women over the age of 50 are expected to suffer an osteoporosis-associated fracture.4

Osteoporosis can have a negative impact on personal quality of life; however, it also has larger societal implications. In the EU alone the annual cost of osteoporosis is projected to increase from €37 billion in 2010 to €47 billion in 2025.5 A relatively modest improvement in population bone health could greatly improve quality of life and reduce healthcare costs.

Calcium is a key constituent of bone and is critical for building and maintaining a healthy skeleton. However, adequate dietary calcium (with or without supplementation) does not guarantee the optimal delivery of calcium to bone. Vitamin D3 is needed to increase absorption of calcium from the intestine to make it available for bone building. However, it’s the third leg of the stool — vitamin K2 — that ensures that the calcium in the bloodstream reaches bone and is incorporated into the bone matrix.

Osteoblasts, the bone builders, are also affected by vitamin D3.6 However, without K2 the bone-building process does not function properly. Osteoblasts produce osteocalcin, a protein with important roles in bone mineralization and calcium homeostasis.7 Osteocalcin is activated by a carboxylation reaction, a reaction in which vitamin K2 is the essential cofactor. Once activated, osteocalcin binds calcium in the bloodstream for transport into the bone matrix.8 Vitamin K2 also activates matrix Gla protein, another protein that helps to ensure that calcium is transported to bones and not areas where it can be harmful.

Of the 10 menaquinone forms, MK-4 (with a shorter side chain) and MK-7 (with a longer side chain) are the most important to bone health. Although both have demonstrated bone health benefits, MK-7, for several reasons, activates the greatest proportion of osteocalcin and is the preferred form for supplementation.

Several studies have demonstrated that, among healthy individuals, less than half of the osteocalcin and matrix Gla protein in blood serum is activated, and that vitamin K supplementation increases activation.2,13–17 For example, a recent study of vitamin K levels in healthy volunteers showed a high concentration of non-activated osteocalcin, and that vitamin K2 supplementation could improve bone health.18 Research indicates that a daily intake of 90–120µg of vitamin K2 (US RDA) can greatly increase osteocalcin activation.14,17

Recent clinical studies have more directly established the benefits of K2 MK-7 to bone health. Postmenopausal women are particularly susceptible to osteoporosis and bone loss as a result of reduced oestrogen levels. In a study of 244 healthy postmenopausal women who took 180µg of MK-7 or a placebo every day for 3 years, MK-7 limited the age-related declines in BMD and bone strength in the lumbar spine.19 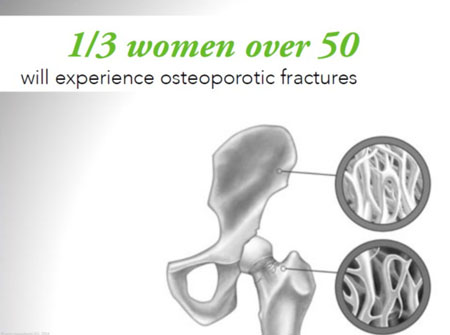 Further, it has been observed that in areas of Japan where natto is consumed, there are lower rates of bone and cardiovascular diseases.20 Epidemiological studies from Japan substantiate the idea that MK-7 promotes bone health.21,22 A large 3-year study showed that the consumption of natto by postmenopausal women was associated with a lower decline in femoral neck BMD.23 This association was attributed to the MK-7 in natto. A second Japanese study found that vitamin K intake, especially MK-7, was inversely correlated with fracture risk in men and women.20 This association was stronger than similar inverse correlations for calcium and vitamin D. Other studies showed that natto intake was inversely correlated with hip fracture risk in postmenopausal women and was associated with improved BMD in elderly men.24,25 As well as implying that MK-7 has beneficial bone health and fracture risk effects, these studies also indicate that MK-7 is safe and free from side-effects.

Vitamin K2 exerts a more direct influence on bone health compared with K1: however, there are other fundamental differences. K2 MK-7 has a far longer half-life compared with vitamin K1. After being absorbed from the digestive tract, vitamin K1 quickly disappears from circulation (half-life = 1–2 hours). By contrast, MK-7 has a very long half-life (in the range of 2–3 days).10 This difference means that people given equivalent amounts of vitamin K1 and MK-7 have considerably higher serum concentrations of MK-7. As a result, MK-7 is far more bioactively accessible.26 K2 MK-4 also has a very short half-life, (also measured in hours rather than days).

As such, MK-7 supplementation at microgram doses can achieve bone health benefits.10 Vitamin K1 and MK-4 also promote healthy bone, but only at very high doses: 1–5mg for vitamin K1 and 45mg for MK-4.7,27,28 The short half-lives require these high doses. In such high doses, though, vitamins are often classified as drugs, rather than food supplements. This is the case for MK-4, which is used in Japan at a dose of 45mg/day to treat osteoporosis.29

Not just bone: other potential benefits of Mk-7 supplementation

Bone and the skeleton itself are often underappreciated for their complex, dynamic and interrelated influence on overall health. For example, the calcium stored in bone is critical to maintaining a healthy skeleton, but is also required for muscle contraction, nerve signalling and certain metabolic reactions. Conversely, the accumulation of calcium in blood vessels, the brain or the kidneys (so-called calcification) is highly detrimental to human health. Disease states in bone often predispose us to problems in other body systems, and vice versa.

For example, osteoporosis is associated with an increased risk of cardiovascular disease (CVD). A study of postmenopausal women found that bone mineral content was inversely associated with CVD mortality.30 Importantly, osteoporosis has been implicated in the calcification of blood vessels, the extent of which predicts future coronary and other CVD events.31 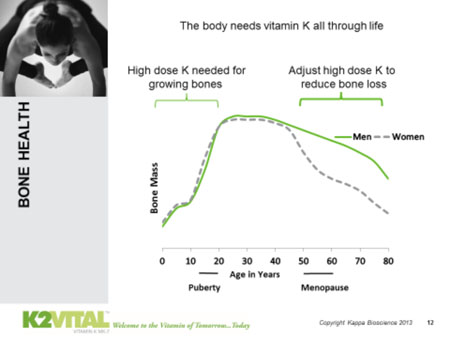 MK-7 may have positive effects on blood vessels. A study of 564 postmenopausal women found that a high dietary intake of vitamin K2, but not vitamin K1, was associated with reduced coronary calcification.32 Moreover, matrix Gla protein, whose activation is dependent on vitamin K, inhibits vascular calcification; inadequate activation of matrix Gla protein is associated with vascular calcification.33 A very recent randomised double-blind placebo-controlled study found that the daily intake of 180µg of MK-7 for 3 years reduced arterial stiffness in postmenopausal women.34 Another recent study found that the daily intake of a 90µg of MK-7 supplement reduced the progression of carotid artery atherosclerosis, but not coronary artery calcification, in patients with chronic kidney disease.35

Inflammation is a key feature of CVD and has been implicated in the development of osteoporosis. The inflammatory marker, C-reactive protein (CRP), a predictor of CVD, was inversely correlated with BMD in a study of elderly females, although not when other explanatory factors were adjusted for.36 The inflammatory disease, rheumatoid arthritis (RA), has been highlighted as an example of how inflammation and osteoporosis are linked, with RA patients being at increased risk of osteoporosis.37 Notably, a recent randomised clinical study of RA patients showed that daily intake of 100µg of MK-7 for 3 months reduced RA disease activity, as well as CRP and non-activated osteocalcin levels.38

In Western populations, vitamin K2 deficiency seems to be common. Available data suggest that supplement doses of vitamin K2 (MK-7), but not vitamin K1, promote healthy bone. Moreover, MK-7 is safe, with no reported side-effects, even at high doses. By increasing intakes of vitamin K2 in the general population, we may reduce worldwide healthcare spending on osteoporosis and offer substantial benefits to individuals in terms of bone and cardiovascular health. Early indicators also point to a wider role of K2 in overall health, ensuring a continuation in the story of K2 development for years to come.